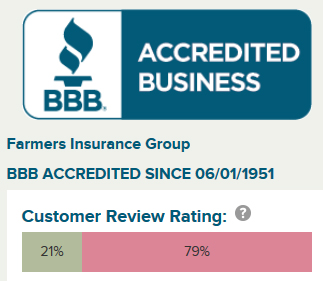 “I have been a customer with farmers for auto and home for 5 years. Overall thought it was pretty good until i filed my very first auto claim. Van in shopping area during a very windy day while i was indoor shopping. Upon returning noticed mild damages on bumper and both van doors. I am not sure as to cause possible carts, possible vandalism, don’t know and of course no witnesses. Claims agent came to look at the car and stated these are 3 separate claims and 3 deductibles. Even if same time can’t be on same claim. I was in shock and still am. Will pay for it cash and switch to another insurer who doesn’t play these games to save money. Heed the Warning!  ”

“Hello to whom may this concern , FARMERS is the worst insurance to have , not only they charge you for fees that have no meaning to the business except for the fact that they just want to collect as much money out of you once you sign up with them but when it comes down to submit an accident they will NOT inform you properly on how to pursue the claim so it gets taken care of asap and more importantly properly . I was involved in a minor incident and the other party had State Farm and I’m in the process of switching insurance due to the fact that FARMERS is withholding my deductible with no legit reason on why they are holding my refund , they informed me that the deductible was going to be refunded . This has been going on for two weeks now I just got off the phone with STATE FARM and they informed me that everything was taken care of and paid to my insurance (FARMERS) with no complications . Now I try to get a hold of my agent and she is avoiding my calls . If you need ANY information please feel free to contact me .”

“I have 3 BMW’s covered with “storage insurance”…one vehicle was parked in my yard and a motorist drives into my yard and crashes into my vehicle (hit and run)..Farmers says they don’t cover that..PATHETIC..If you have Farmers and or are considering them, DO NOT! The best is that one Farmers representative said it”s covered but when the adjuster called, they informed me they do not. People need to band together and demand insurance scammers like Farmers change their rotten ways!  ”

“this company practices what is called price optimization – they slowly raise rates hoping you wont notice … ok so i payed my bill without doing due diligence in terms of my premiums – lets this be a warning to ALL insurance customers – i have no excuse – their own web site gave me a cheaper quote than my bill was … the problem is the customer service here – in 3 years of having farmers insurance i never have been able to contact my agent … most of the time i would get frustrated and just call the 800 number – but this time i was told [ two times in fact because i tried again] that i had to talk to my agent – you cannot cancel from the 800 number … well i never could and still never have been able to contact my agent …. they called me when they thought i was overdue on my payment and wanted their money … a collection agency im not quite sure who it was [wasnt the agency] … but farmers billed me for the time – 49 dollars in fact – for 23 days over that i could not get a hold of them ….. so ok farmers you got a few extra bucks outta me – and in return gave me lousy customer service — im at least gonna let everyone know i can about my farmers experience – was it worth it ?  ”

We have been in the same home for 15+ years. As a current farmers customer I now realize it’s the worst mistake of my life. We had a house fire. Due to the sot and ash still in the air, my father has now been in the er twice. Continuing to drag your feet with the “farmers suggested” restoration company is seriously taking a tole on my family. Not only have you proven to care nothing about your long term loyal customers, you have shown me that your company was the worst mistake of my life.”

“I have been paying for insurance for my rental home through Foremost/Farmers for 5 years. Never one late payment in that time. I had some renters who did significant damage to my rental home. I met with my agent and he initially said they would cover $8000 dollars for the damage. That $8000 turned into $2000 once I received a copy of his report. He then called me a week later and said that they reviewed the policy again and found a loophole to where they didn’t have to pay anything. They put a stop payment on the check and now refuse to return my phone calls. I had a $35000 policy and they are giving me nothing. Please do not do business with this company. They are frauds and thieves. The only good news is that after I contacted an attorney, he says that I have an extremely strong case. Hopefully I can get some of the money back that I have paid them for 5 years.

“I called my agent about my car being broken into. They informed me that I had $1000.00 deductible (OK that was my choice) but then said I might want to think about not filing a claim because I would lose my “no claim discount.” Now that is “not the same as penalizing you for using your insurance, it is just losing your discount. Really? It is EXACTLY the same thing. Nothing like getting ripped off twice. This company is just as much a thief as the guy who broke into my car. We’ve paid tens of thousands of dollars over the last 20-something years without making a claim. The first time we have one? We are told not to submit and penalized.”

“The rates as quoted did not match the premium charged at times. The cancellation process is an Unfair Trade Practice in that when they are notified in writing and through customer service of a cancellation of insurance coverage, they do not follow instructions and seek to further delay the cancellation causing additional charges to consumers.”

“I was only 2 weeks with this company then canceled my auto insurance they did not return my money at all then when I call them they start to argue with me that I still have to pay $14 more because they have a cancellation fees. It’s ridiculous I’m not recommend this company be careful read first everything then sign paper . This company it’s just taking advantage from people . Stay a way far from this company . I’m from Arizona.when I call here the agency than pay for auto insurance but the statement shows 3 diferant address one in Mesa.Az other at Pasadena.CA and the tired address shows at Hollywood.FL. Foremost insurance.coast national insurance .bristol west insurance .stay Farr from this company’s ..I’m not recommend”

“I’m not one to complain about a company, but this experience from start to finish has been awful. When my Fiance and I Went to farmers we had a great experience with the local agent he was nice and helpful. That’s where the good ends. To get a hold of said agent you had to call and leave a message and wait for a call back. Most the time it was quicker just to drop into his office. When we started our auto insurance policy, it took almost 3 months before the payments started getting pulled from my account, even though we set up direct deposit. That was the first nightmare, the second nightmare was when we tried to cancel the auto policy. We put my Fiance’s name on the auto policy since he had homeowners insurance through them as well. Well he was out of state working, when we found a new company with the same policy, but half the price. So when I called to cancel the girl I talked to didn’t say anything to me about the main policy holder needed to be the one to cancel not me. She only told me to fill out the email they were going to send me and to send it back and it’d be canceled. I did that and checked a few days later to find the policy wasn’t canceled. No one sent me an email to explain that it had to be my fiance who sent the email. So when I called to find out what was going on they worked really hard to help me, which was great. Unfortunately since they didn’t tell me the first time about the cancellation terms I was too late to get a stop payment on my account so I wouldn’t have the bill taken out. So I waited a week and half to call to check and see when I was going to get my money back from them. Only to find out that they are mailing me the check instead of just returning the money to my account. And the catch to getting the check was that they didn’t schedule my refund to be sent out till 2 weeks after I finally got the account canceled. I got sent to billing via the customer service and was told that they could cancel my check and have my money back to me in 3-5 business days and then it’d be a few days after that to get the bank to process the deposit. She also told me to call back in 5 to 6 days to make sure they had processed everything for me. I called back 5 days later to get an answer of there is nothing on your account about cancelling the check and sending the money directly to your account. And when the girl tried to figure out why they didn’t do what the said they would, she found out that they can’t just cancel to check. And that it would take 7-10 days to cancel it and another 5-10 to get me the direct deposit, plus however long it took my bank to process the deposit. So almost 4 weeks later from my policy cancellation, I’m still without my refund. Which wouldn’t be a huge problem if I wasn’t going to be on vacation out of town for a whole week with a friend, and now have barely any money to pay for the trip.  ”

“I had a policy for 27 years with foremost insurance company part of farmers insurance. they insured my mobile home. I made a claim for water damage, first claim in 27 years. It was turned down, they claim it was old age rot when you can plainly see it is water damage and you can feel the water in the floor. do not do business with a company that lies ”